Homophobic blogger Douglas K. Handshoe, a Mississippi accountant, has not once, but twice failed to get the Chief Judge of New Orleans Civil District Court (CDC) to accept his motion purporting that civil rights attorney Daniel G. Abel's damning defamation lawsuit against him is somehow designed to prevent public discourse on a matter of public interest. These types of motions are called "anti-SLAPP" (strategic lawsuit against public participation).

Handshoe has referred to his legal adversaries repeatedly as "SLAPP Happy Nut Jobs." Now it appears the only nut job is Handshoe and his dwindling coterie of followers.

Inspection of CDC documents reveals that Handshoe first attempted his anti-SLAPP motion in October of last year, and when the court flatly denied it, he tried again a few months later, only to have the same result confront him. How the extremely litigious Mr. Handshoe could file two motions for the same relief in the same court is unknown, but it could be deemed an abuse of the New Orleans court's process. In the same hearing, Handshoe co-defendant and former attorney Bobby Truitt attempted to quash Abel's subpoenas, and failed: 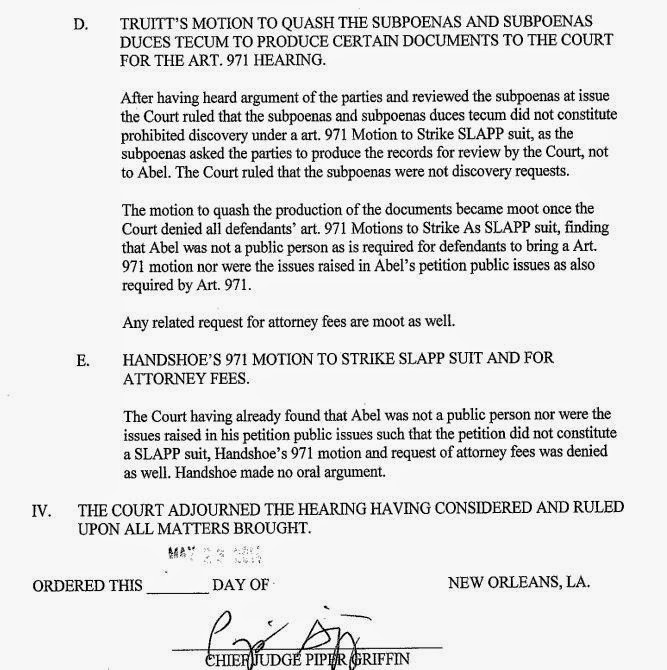 Handshoe, however, apparently thought he knew better than the court, and attempted his at this point idiotic and ill-conceived motion again a few months later. On April 25, 2014. the judge again denied Handshoe's anti-SLAPP motion.

Legal Jackassery at its finest!

Handshoe owes some $817,000 in Canadian court judgments to Abel's business partners Charles Leary and Vaughn Perret as well as Trout Point Lodge. An effort to collect a copyright infringement judgment against Handshoe is currently winding its way through the Mississippi court system.

Handshoe's campaign to damage and embarrass those he has chosen to target using the Internet may be entering a new chapter as Abel's lawsuit moves inevitably forward.

CDC documents also show that Abel has applied for a default judgment against Handshoe and his co-defendant Vandenweghe. The court set a hearing to confirm the default on September 3, 2014. 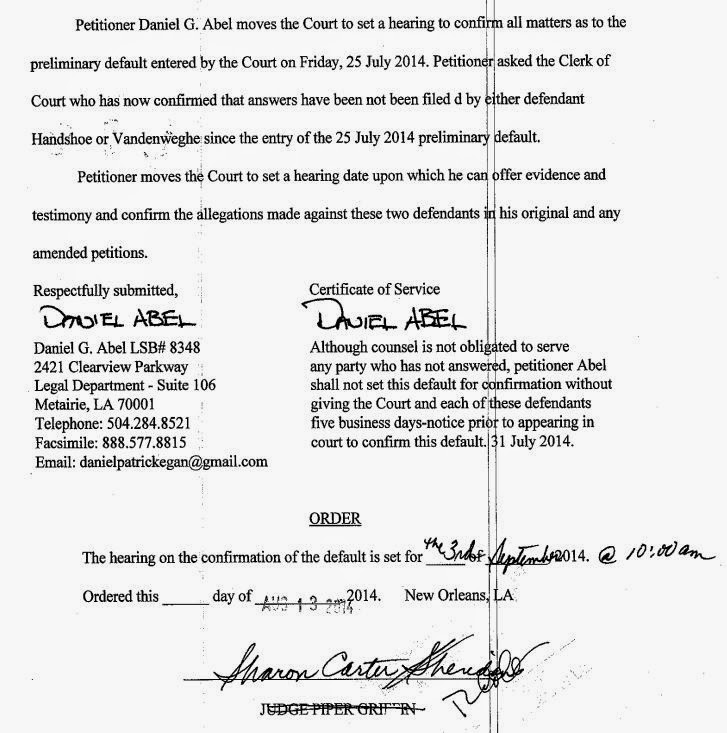 Handshoe, who has claimed to be the premiere legal affairs blogger in the Gulf South, apparently will have some serious lessons to learn about legal process.